Golf Croquet is a game in itself, completely separate from Association Croquet. Although it has a long history, it has experienced a recent resurgence of interest at all levels.

There are many Golf Croquet tournaments including regular World Championships, so it is not just a beginner’s game.

It has a much simpler set of rules and therefore can be learned more quickly than Association Croquet. Games are generally more interactive and take less time to complete. This makes it attractive to those who do not have the time to play Association Croquet, and beginners can use it to acquire some useful croquet skills.

Games of Golf Croquet are started from within a yard of the 4th corner. Note: There are no yardlines in Golf Croquet. 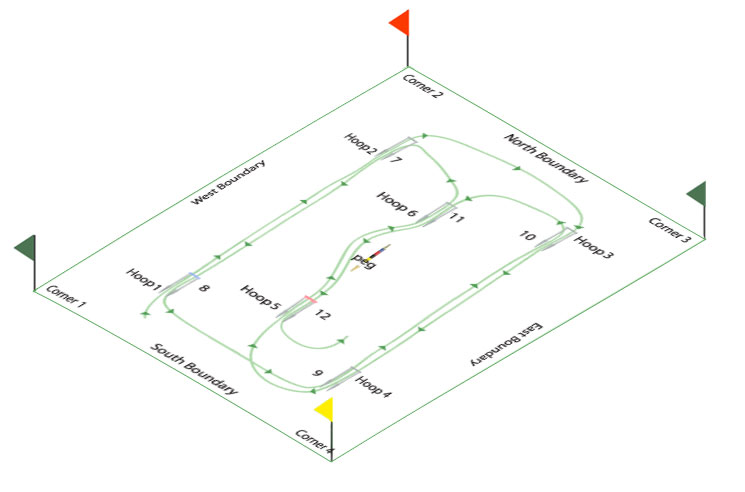 The basics of the game

As in Association Croquet the blue and black balls play against red and yellow (if you are using secondary colours then it is green and brown, against pink and white). Games can either be singles or doubles. If it is doubles then each of the two partners has one ball only.

Each person has only the one stroke in each turn. The balls are played in colour sequence – blue, red, black, and then yellow. This sequence is shown by the colours on the peg.  If two games are being played on the same lawn then different coloured balls are used for the second game – in sequence green, pink, brown and white.

Before the game there is a toss and the winner then plays blue – the first ball towards hoop one, followed by the other player(s) in the game. By the second turn it is usual to find players trying to get right in front or even through the first hoop. As soon as one player makes that hoop, then all players contest the next in order.

If a player is unable to make a hoop, and sees that an opponent might do so, there is a temptation to sneak towards the next hoop in order.  There are penalties for doing so.

It is not necessary for a ball to go through a hoop in one shot. Sticking in the jaws is O.K. until the next turn for that ball, BUT an opponent is allowed to knock the ball out. If the ball is knocked through the hoop by an opponent, the opponent gives the first player the point.

This is a very simple introduction to the tactics of Golf Croquet. There are skills in playing this version of the game and of particular importance is the ability to hit straight either in order to make hoops or knock other balls away.

The objective is to get through a hoop before the opponent does and two basic strategies used to achieve this are to:

A useful shot when blocked is the jump shot, where, by hitting down on a ball, a player makes it jump forwards – usually over an opponent’s ball, or to make a difficult hoop (i.e. from an acute side angle).

Note: it is now possible under the laws for a player to use a jump shot to go through a hoop (see law 6(e) which has removed the previous restriction on this ploy.

When playing, it is important to remember the sequence of balls, and to plan how to protect your own balls while frustrating your opponent. For example, you might wish to send a ball behind the hoop to be in a position to knock the opponent’s next ball out of or away from the hoop.

Once the basics have been mastered, players must become familiar with the rules – fortunately there are only 16 of these. The rules concerning interference and faults require study and those concerning behaviour and the respect for referees are different to what an Association Croquet player might expect.  If you are to enter a tournament, you must have a handicap, and Law 16 sets out how this can be done. Finally the rules about playing for the next hoop must be understood.