Modern croquet is played as a singles or doubles game in which two sides compete against each other by hitting balls through a sequence of 12 hoops. In singles one player takes two balls and in any turn decides to play whichever ball is better placed. In doubles, partners take one ball each but they must also decide which is the best ball to play during a turn. By playing a sequence of strokes, players may keep a turn going and complete several or all hoops in a single turn. The game is won when two balls of one side complete all the hoops and “peg out”, or if they are ahead when time is called. The art of the game is to master the physical side of using a mallet to hit balls very accurately, and to be able to plan a winning strategy.

The balls are hit through six hoops in one direction and then through the same six hoops but in a reverse direction. The final shot is to hit the peg in the middle of the lawn. The side which “pegs out” both balls wins the game. As each ball may pass through 12 hoops and then hit the peg, it can earn 13 points. With two balls to a side, a game can thus be won by scoring 26 points. Most matches are played to a time limit, and if this is reached, the winning side is the one which has scored the most points. 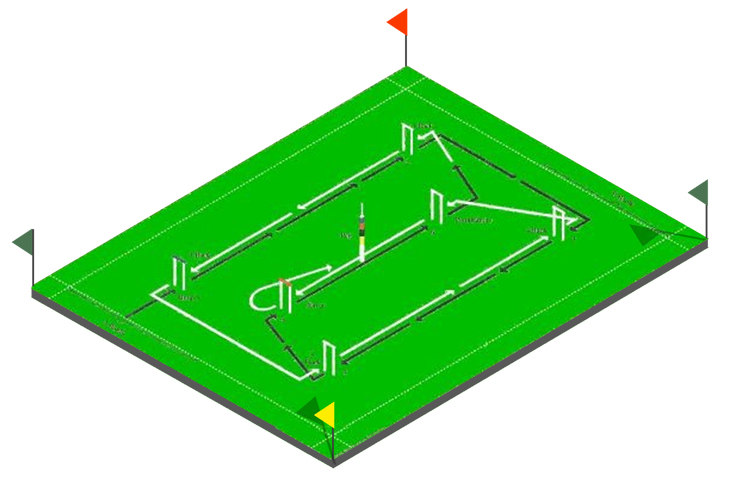 Players make a sequence of shots by hitting their ball onto another (called a roquet). The player then places their ball against the hit ball and plays a two-ball shot(called a croquet shot) in order to get near another ball or a hoop. They then play a further shot (a continuation stroke) to try and hit yet another ball or pass through a hoop. Thus the sequence of shots is roquet, croquet and continuation.

In any one turn, a player may use any of the other three balls on the lawn once in making the sequence of shots before making a hoop. When a hoop is made, the three other balls may be used again. By using up to three of the shot sequences, a player may move from one hoop to the next and thus make a whole series of hoops in the one turn – called a break. Coloured clips placed on hoops are used to mark a player’s progress.

The game involves considerable strategy in placing balls in order to make breaks, and skilled players can finish a game in a few turns. Many players do not achieve this level of skill, but can still play successfully against more skilled players in handicap games where they can have extra turns (called bisques) which reflect the differences in ability.The game thus involves exercise, physical skill and the ability to develop a strategy for making breaks and winning games. This is why it has be likened to a combination of chess and billiards played on lawns. It suits both young and old (the age range of players ranges from 7 years to over 90). Some enjoy it for the social elements of club play, and others play it competitively. It is truly a game for all reasons.

For more information see the laws and regulations of croquet, All files are included in a one time downloadable .zip file.