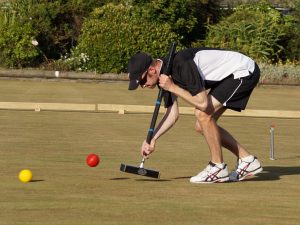 While in intermediate school Toby would attend tournaments in which his step father, Kevin Fellows, was playing. Initially he didn’t see the attraction but decided to give it a go and was hooked very quickly.  Association croquet was the only major code when he started in 1993.  Toby credits Kevin as being an incredibly good coach and having a huge passion for the game.  Also having the live-in support was invaluable.

Toby first joined Waimarie Croquet Club (now Waimarie Hutt Valley CC) and continued to be a member for over 20 years. In 2017 he joined the Wellington Municipal Croquet Club on Mt Victoria in Wellington.

Toby immediately decided that the standard grip was going to be the way he held his mallet. He says, “It just felt the most natural to me.” For a few years he grounded his mallet before striking the ball, but after watching a few players such as Aaron Westerby, Shane Davis and some of the Brits – David Maugham and Rob Fulford – he started casting and has stuck with it ever since. Of the players he watched, only Shane has a standard grip and all of them cast and hit incredibly well.

While Kevin was the primary influence on Toby’s game, another leading player, Tony Stephens, generously put time into helping him learn the ropes.

In 1996, three years after Toby gave croquet a go, he played association croquet in his first nationals and invitations.  He played in school-age tournaments in Hastings and Palmerston North in 1994 and 1995 respectively. His lead up to playing in the nationals was by playing in events mainly in the lower North Island, most often alongside or supported by Kevin.

Toby says he “feels incredibly lucky to have happened across croquet. I’ve made lifelong friends, have had numerous opportunities to represent my country and have been able to travel all over the world playing the game. It’s been a huge part of my life for over 27 years, and it has given me so much.”

Toby is a natural with a beautiful swing and a passion for croquet. He rose rapidly and won his first national event in 1998 and was the captain of the MacRobertson Shield ten years after first giving croquet a go. Toby continues to play croquet but is also busy raising a young family.

Full bio and list of achievements can be found here.