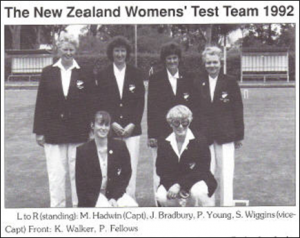 Susan was a very accompolished sportswoman before taking up croquet, excelling in equestrian events, figure skating and Golf.  She exhibited the same gritty determination as a croquet player, coached by Fred Guernsey at Fendalton Park club she adopted the same tactical approach as Fred employed which tended to be rather careful and somewhat defensive.  Susan sometimes expressed the wish to become a more adventuresome player but Fred’s influence made that difficult.  However, on her day she was a formidable opponent, never giving an inch and remaining determined to win to the very end.