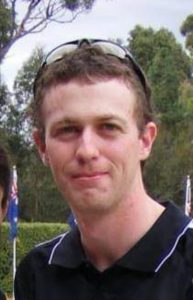 Paddy started playing croquet at the age of 11 at the Cashmere Croquet Club in Christchurch.  He was helped immensely by the members at Cashmere – Kay Wade, Liz & Alan Milne and numerous others played an integral role in his development in the game. At the same time, Don Young from a nearby croquet club (Barrington) was coaching over a dozen 10-12 year olds on Saturday mornings. Paddy attended these sessions in addition to the coaching he was receiving at Cashmere. Another big factor in his croquet development was that, coincidentally, the sport’s pinnacle team event, MacRobertson Shield, was taking place in Christchurch in January 2000. Watching this major event was a big inspiration for him and very influential with him learning more and improving his skills to one day, hopefully, compete in the “Mac” himself.

In 2001 the National School Age tournament was held in Christchurch with Paddy winning the event unbeaten. It was where he was first introduced to the legendary John Prince. John began mentoring Paddy the following season. They would play each other at the United Croquet Club almost weekly. This continued for several years and was absolutely instrumental in Paddy’s progress. Paddy’s playing style was heavily influenced by watching, studying and playing against John over many years.

2005 was a major year in Paddy’s croquet development by being selected for his first World Championship event that was held in England. It was a step-change improvement when he qualified for the knockout section. Despite losing in the first round of the knockout to John Gibbons, he went on to win both halves of the plate event outright. Two months later he won his first major title by claiming the NZ Top 10 Invitation with a peeling finish in every game.

Paddy set personal goals early in his playing career. They were to win the three most important events:  the NZ AC Open, the MacRobertson Shield and the World AC Championship, and he succeeded by winning all of them.

In 2010 he claimed the NZ Open singles title, defeating Stephen Mulliner 3-1 in a high-quality final consisting of only 23 turns. In 2014 he was a member of the victorious NZ team that reclaimed the MacRobertson Shield that ended a nearly 30-year drought for NZ. Overall Paddy has competed in four MacRobertson Shields in each of the four host countries.

However, Paddy’s career-defining achievement (up to this point at least!) came in 2018 at the Croquet World Championship in Wellington where he defeated arguably the best player ever, Reg Bamford. He won the final 3-2 to become Croquet World Champion. This was the first New Zealander to do so since Joe Hogan won the inaugural event in 1989.

It is very fitting that, although John Prince has not been a regular competitor on the croquet scene over the last decade, he was present at all three of these moments.

Other titles Paddy won over the years include the Australian Men’s Championship, Australian Gold Medal, Australian Open Doubles, British Open Doubles, and in 2015 the prestigious UK President’s Cup that is an invitation event for the top 8 players in the UK. He was the first and only New Zealander to win the event.

Away from playing, Paddy is also a registered coach and has run numerous coaching sessions at his local clubs over the years. Recently he contributed a chapter on peeling developments in the latest croquet book on the scene: Beyond Expert Croquet Tactics. While family and work commitments have taken priority over playing for the moment, he still fits in a few tournaments a year and keeps a keen interest in croquet matters. Currently he is serving a third year on the CNZ Tournament Committee. For the last few years, Paddy has been living and working in the UK, with his wife, Miranda, and their two kids Ollie and Tilly.

Full bio and list of achievements can be found here.