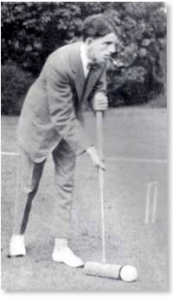 Keith Izard’s croquet achievements are inextricably linked to the establishment of the Khandallah Croquet Club in Wellington.  A recent celebration of its centenary tells how the club owes its beginnings to the activities of three generations of the remarkable Izard family, including Keith Izard, one of the greatest croquet players New Zealand has seen.

Keith Izard’s grandfather Charles Beard Izard built a 24-room house on his Khandallah section and named it Woodmancote after a family home in England.  This was the family’s home for some years and then it became their country retreat.  The property included a croquet green below the house, sitting at the foot of Mt Kaukau.  Picnics were held here as well as croquet, and in time, Woodmancote became a social centre for Khandallah.

Mr Izard died in 1904 and his eldest son, Charles Haywood Izard took over management of the property. He and his wife Stella had just one child, Keith Halstead Izard, born 26 April 1887 – a signal event in New Zealand croquet history.  Like his father, Charles was prominent in Wellington business and in politics.

It seems likely that Keith Izard was introduced to croquet on the Woodmancote croquet lawn during his childhood. He went on to an extraordinary career as one of the top croquet players New Zealand has produced. Ann Moffatt (2004) wrote,

Keith was educated at Terrace School Wellington, Wellington College and then Cambridge University, where the records indicate that he was a rather casual student. Keith excelled at croquet though….

As well as playing croquet in New Zealand, he competed in Great Britain where he won the (English) Croquet Association Silver Medal in 1906, and the President’s cup in 1908, 1912 and 1914, as well as the Scottish Gold Medal in 1909.  John Prince, who himself won the New Zealand Men’s Championship with a run of seven consecutive titles from 1966 through 1972, has detailed Keith Izard’s career, especially in New Zealand  – extract from New Zealand Croquet World, March 1954[1] March 1954

Izard was invited down from Wellington to compete in the first Canterbury Championships in 1910, where he triumphed in singles as well as doubles, partnered by one of his pupils – a Mrs. Pearce, also from Wellington.  When Izard won again [the Canterbury Men’s Singles] the next year, the question arose about outsiders competing in the Canterbury Championships.  A compromise was reached, and in 1913 in addition to the Canterbury events for local players only, national titles, including Open Singles, Championship Doubles, Ladies Singles and Handicap Singles, were added.  The new national events were to be open to all comers.  So Izard became the first New Zealand Champion, a feat he was to repeat in 1914 and 1915, in singles as well as doubles in partnership with a young Miss Rutherford from the United Club.

He was by all accounts an exhibitionist and perfectionist by nature.  He had perfected his game playing in tournaments in England, where he was accorded a mixed reception by many of his contemporaries.  To some he was a dashing player who indulged in the all-too-rare finesse of croquet, to others he was a conceited egotist given to exhibitionism.  Admittedly he had a quick temper which tended to make him short in manner and perhaps a little intolerant – particularly when others did not display the same partiality to the more risky manoeuvres of croquet.

Keith Izard died in the influenza pandemic in February 1919, aged 32.  In 1921, his father donated to Wellington City, as a memorial to Keith, a block of land in Wadestown that was never to be built on, and is now known as Izard Park.  He is also remembered by the Keith Izard trophy, a three handled drinking cup.  Also known as a loving cup, these were usually made of ceramic or silver and were designed for passing from guest to guest at the end of a banquet.  The cup was used by the Wellington Croquet Association for interclub play, and was gifted to the Khandallah Croquet Club on the occasion of its centenary in 2014.