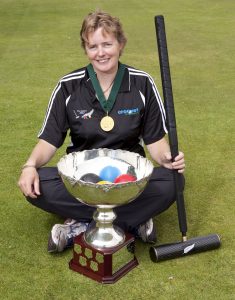 Jenny Clarke’s path to playing croquet was a circuitous one. She played cricket at Oxford University (1995-1999) and started playing squash to keep fit for cricket. She was also the treasurer of the Oxford University Women’s Squash Club for a year. During that time, due to persistent back injuries, she was keen to have sporty activities to do outside when cricket wasn’t an option. She’d played squash with the senior treasurer of the University women’s squash club who was also the University croquet coach, Dr Ian Plummer. She thought that as he was pretty fit and seemed very intelligent; perhaps croquet was worth giving a go. So she signed up for his Introduction to croquet programme. However, she actually learned to play online through Ian’s oxfordcroquet.com site while on a research trip to a collider experiment in Hamburg, using coins to make a croquet “lawn”, and moving them around to play a break.

Jenny returned to NZ in October 2005 and joined Cashmere Croquet Club for about a year before moving to Elmwood for a brief time. Finally, she and her husband Chris moved to their current location in Shirley and joined United Croquet Club where she has been a member for 12 years.

Originally Jenny played with a slightly split standard grip having picked up a mallet the same way her coach, Ian Plummer, did. When on the Oxford CC tour of California in 2000 a few of the team had some fun copying Dave Maugham’s Solomon grip, which she found worked well and used for several years. A return to Standard grip came after Chris Clarke commented on her poor croquet strokes and due to a lack of touch around hoops.

Then in 2007 (3 months after winning the Swiss Open in a best-of-five against Stephen Mulliner), a persistent wrist injury caused Jenny to consider stopping playing. Being somewhat ambidextrous, she swapped hands instead. After a rough start to left-handedness, including a run of 15 straight losses she decided she was still right-handed for croquet strokes. Now she plays all standing up strokes, such as shooting, take-offs,

some high-ratio croquet strokes like stop shots, left-handed, and all other croquet strokes and jumps right-handed. She has a range of strokes around a drive where she sometimes has a bit of trouble working out which way around to hold a mallet!

Jenny played her first tournament in 1999 – the Open Association Croquet Oxford Tournament. She was delighted to have a 3-hoop break as a handicap 16. A bit later in the season she played in the Cheltenham Easter Handicap Weekend and was cut to a handicap 5 the day before the tournament by coach Ian. She won most of her games, and was surprised to discover she had won her section of the tournament! Shortly after that she started playing in more tournaments. She had her share of very low-win events ever since then, as well as some very enjoyable tournament wins.

Surbiton held a one-day GC event during Easter 2003 and 2004. These were Jenny’s first competitive Golf Croquet, and were used as a warmup for the UK AC season. At that time GC wasn’t widely played, and was frowned upon at her club. Her first proper tournament was the 2006 GC Open World Championship in Napier/Hastings. She had to convince Charles Jones to let her play. (Charles later acted as celebrant at Chris and her wedding, and before that managed several NZ team events that Jenny played in.) She came 7th in that world championship event.

Jenny’s first ranking game in New Zealand was beating Harps Tahurangi in the 2003 New Zealand Open. Since then she and Harps have played plenty of times all over New Zealand, and most recently had a very enjoyable doubles partnership in the 2017 MacRobertson Shield.

Jenny continues to be recognized for being ranked the top woman in the world in both AC and GC. She has held the AC distinction most of the past 14 years. She has also held open world rankings as high as number 6 in Association Croquet and number 10 in Golf Croquet in the world, making her the highest ranked woman in the world in modern times. Jenny is understandably the top ranked woman in NZ in both codes. She was named CNZ Player of the Year in 2019. Besides the achievements that are listed, Jenny is an Examining Referee for both Golf Croquet and Association Croquet. She manages and referees tournaments as well as coaching players at all levels, which saw her receive the honours of being made Patron of Holmes Park Croquet Club in 2016 and a life member of the Canterbury Croquet Association in 2018.

Full Bio and achievements can be found here.