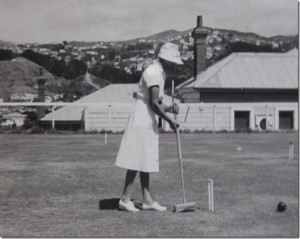 Inducted into the World Croquet Federation Hall of Fame in 2015

In the late 1970s Jean Jarden was generally regarded as the best women’s croquet player in the world.  She was also regarded as one the three best Kiwis among the NZ Women and was very competitive in open events.

The following are memories of Jean from John Prince.

Jean played with a very upright side style holding the mallet with both hands at the top.  She was a very reliable shot, hardly ever missing at 10-12 yards.

During her match in the 1963 MacRobertson against England at Hamilton, her opponent Pat Cotter unwisely dribbled at Jean’s tice, missed and finished on the boundary level with hoop two.  Jean promptly hit the tice dead centre effectively rushing it to Cotter’s ball and established a break to 4 back.

When stalking a long shot, she would pick out a spot about 2 yards ahead of her ball and focus on that spot throughout the shot.  When I first saw her playing in the early 60’s, like nearly every player she would take the longer defensive lift shots usually from “B” baulk at partner centre court.  Around the 70’s players started to take on the short lift from time to time and Jean became very consistent, so much so that I’d often lay up quite wide apart when I played her.

Her break play was very tidy and once she established a break she rarely lost control of it.  Like others, she did, however, find half rolls, rolls and pass rolls difficult playing with both hands at the top of the mallet, especially on slow courts.  Her number one fan husband Ben watched every game she played, and would often comment if she failed to pick up a break with a big croquet stroke.  Several people tried to get Ben, who never played, to sit the Referee’s exam as he’d become quite an authority on the game but he much preferred to follow every shot Jean played.  Her All Black son Ron would often send her telegrams during a tournament which just said, Head down, follow through etc.  Jean was being interviewed by the Press at Waimarie during a tournament and Ron had dropped by to see she how she was getting on.  The reporter said, and of course you are the mother of the famous All Black wing three-quarter, whereupon Ron said, “No, I’m just the son of a famous N.Z. croquet player!”