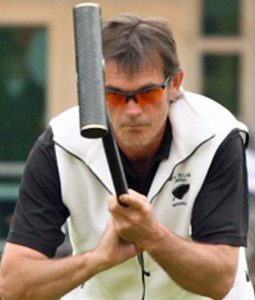 A newspaper advertisement in the mid 1970’s for an open day at the Brightwater Croquet Club in Nelson suggested that “a knowledge of snooker is beneficial”. Knowing nothing of croquet, but being familiar with his mother’s abilities with cue in hand, Greg thought it might be just the thing to get her off the couch!

Brain Wislang handed Greg Arthur Ross’s Croquet Handbook. As a young and ambitious teenager, Greg concluded that the final chapter, “The Triple Peel,” contained the secrets to beating his newfound handicap 3 croquet idol and spent many hours after school at the croquet club attempting to emulate the chapter’s shot-for-shot instructions. On Saturday afternoon’s, self-appointed doubles partner Edith Tongue shared her wisdoms and Greg completed his first season winning the Nelson ‘C Grade’ Silver Badge and a break of 6 hoops.

On a Saturday bike ride 10 years later, Greg came across a Croquet NZ Yearbook at the Hornby Croquet Club and an advertisement for the NZ Junior Championship starting a week later. Manager Maud Trainor accepted his late entry, a club mallet was provided, and Mary Murfitt kindly dressed him in set of husband Roger’s hand-me-down whites! When presenting Greg with the championship trophy, Roger proposed that he may one day represent New Zealand and Greg’s ambition to become member of a winning MacRobertson Shield team was set.

His first International foray came in 1990 including representative matches against the visiting Australian and English MacRobertson Shield teams. “I think I was fortunate to draw an out-of-form Leigh Herington in our Australian match and equally for a windy day against England’s Robert Fulford a week later, but it was in winning those matches that I decided to prioritize my croquet aspirations over motorcycles and meaningful employment”.

Greg relocated to Christchurch where most of the victorious 1986 MacRobertson team resided. Successes in several domestic events followed including two New Zealand Doubles Championships with legendary John Prince. His first of his six MacRobertson Shield selections soon followed in 1993.

An illness contracted shortly after the ‘93 series side-lined Greg’s international aspirations for a decade, but he was again selected for the 2003 MacRobertson Shield series alongside his earlier mentors Brian Wislang and John Prince. His most memorable contribution to that series was locking the keys and team’s mallets in the car boot, 30 minutes before play commenced.

Long standing doubles partners Paul Skinley and Paddy Chapman became most familiar with the “Bryant alternative” over subsequent years – a leave involving the parking of one’s ball in the jaws of hoop 1 with a laid break for opponents, until Chapman’s insistence of a mallet upgrade in 2010 transformed Greg’s consistency. He won his first of five New Zealand Open titles in 2011 after 20 long years of trying and established a successful doubles partnership with Jenny Clarke over the following two MacRobertson Shield series.

Greg’s name was at last engraved on the Shield in 2014, along with the New Zealand ‘dream team’ and seemingly life-long friends Toby Garrison, Aaron Westerby, Chris and Jenny Clarke and Paddy Chapman. He still contemplates the meaning of post-mac life on the southern West Coast of New Zealand, riding motorcycles and creating pathways for future world champions.

See the full bio and list of achievements here.