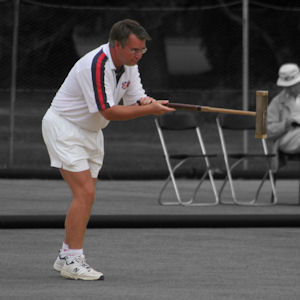 Teachers have been known to be influential in the lives of youth.
Sometimes that influence extends beyond the classroom. When
Chris was 13, his French teacher in England asked if anyone
wanted to learn croquet. This was the serendipity that started
Chris on the course to win 60 national and international croquet
titles.
While he lived in England he belonged to Southport, Bowdon,
Colchester, and Letchworth Croquet Clubs. He joined his first
club, Southport, in 1984. When he moved to Christchurch in
2005, he started playing at Cashmere Croquet Club then moved
briefly to Elmwood. He has been a member at United Croquet
club for around 13 years.
Chris started with split hands and grounded mallet for his swing.
After watching Robert Fulford, at the National Junior
Championship a couple of years after he started, he switched to
casting. It wasn’t until after his dreadful 1989 season that he
started to move his hands together at the start of the 1990
season.
Chris’ first national tournament was in 1988 at the British Open
Championships. Within a couple of months, he won the
Presidents Cup at the age of 17 years, 2 months. He was the
youngest to ever win the title. In 1991, he won a Bronze Medal
in the World Association Croquet Championship. At the World’s
he completed the first sextuple peel in a WCF World Singles
Championship. Chris also completed the first ever delayed
sextuple in the World Championship in 1995.
Chris has never lost a major Team Event in which he has
played. He has the record number of National AC Doubles titles.
He also won his first 23 World Team Doubles matches with
Robert Fulford, which is a record. He finished his International
Team career by winning his last 23 World Team Doubles
matches with Robert Fulford, Paddy Chapman and Jenny
Clarke, an unbeaten record stretching over 10 years.
Chris moved to NZ in 2005 and continued to represent England
until 2012. He went on to win the 2014 MacRobertson Shield
playing at number 1 for NZ and then Captain the 2016 NZ team
to victory in the Openshaw Shield. He is the only player who has
captained both MacRobertson Shield and Openshaw Shield
winning teams. He was inducted into the World Croquet
Federation Hall of Fame in 2010. When Chris was inducted into
the WCF Hall of Fame, he was ranked number one in the world
in both AC and GC. Chris was ranked number one in the world
at AC for most of the last seven years of his singles career 2008
– 2014.

Chris played his last competitive AC singles game in January
2014 at the MacRobertson Shield. He played his last GC singles
game in May 2016 at the Openshaw Shield. Since then he has
exclusively played doubles.
Chris continues to be involved with croquet in different avenues.
In 2005 he instigated the CNZ Youth Squad and coached it for
multiple years. He became a life member of Canterbury Croquet
Association in 2015 and in 2016 the United Croquet Club made
him a life member. He has managed
national and world events and coached players throughout the
years, several of whom have gone on to become World
Champions themselves.
Chris says that “It is my record in team events, doubles and
coaching that define me, rather than any singles wins.”

See the full bio and list of achievements here.