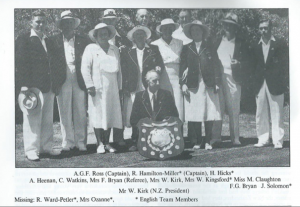 Bill and Ada Kirk made a big contribution to New Zealand croquet over a number of years with Bill serving as President from 1948 to 1956.  Ada was a member of the victorious 1950/51 MacRobertson Shield Team playing one singles match in the third test at Dunedin.  For many years Ada handled the publicity from the Championships every night she could be heard on National Radio giving the results from the day’s play.

She was known to sometimes give a running commentary from the sideline on husband Bill’s play.  Ashley Heenan recalled that it seemed to be whenever he was playing Bill.

Ada in crisp tones would inform all, “Of course Mr Kirk’s play is not as precise as Mr. Heenan but he seems to be managing to hold a break together at present”.  Ashley always found Bill one of those “difficult to beat players”,  no doubt Ada’s commentary was quite a factor.